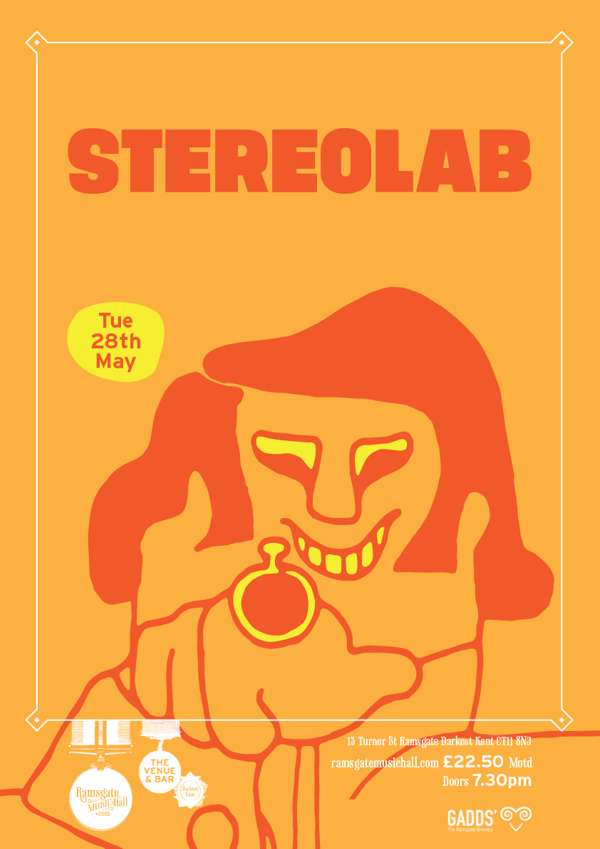 The one and only Stereolab.

After a decade-long hiatus, the legendary avant-pop band are back. We are incredibly thrilled, and utterly honoured, to have them in Ramsgate for TWO shows!

"No other artist of its generation fused the high-minded daring of the avant-garde and the lowbrow infectiousness of pop with as much invention, skill, and appeal" - AllMusic

Stereolab need no introduction. They are regarded among the most innovative and influential groups of the 1990s. Led by the songwriting team of Tim Gane and Lætitia Sadier, the group's music combine influences from krautrock, lounge and 1960s pop music, often incorporating a repetitive motorik beat with heavy use of vintage electronic keyboards, and female vocals sung in English and French.

In the 90s, Stereolab either celebrated forms of music that were on the fringe of rock, or brought attention to strands of pop music -- bossa nova, lounge-pop, movie soundtracks -- that were traditionally banished from the rock lineage. On early singles and albums such as 1993's Transient Random-Noise Bursts with Announcements, Stereolab combined '60s pop melodies with an art rock aesthetic borrowed from Krautrock bands like Faust and Neu!, but by the time of 1996's Emperor Tomato Ketchup, their sound incorporated jazz, hip-hop, and dance.

Stereolab's unmistakable sound had a lasting impact: During the '90s, indie contemporaries such as Pavement and Blur aped their style, while hip-hop artists such as J Dilla and Tyler the Creator sampled the band's music or collaborated with its members in the 2000s and 2010s.

"Stereolab’s 'Dots and Loops' masterpiece fused analog with digital, past with future, Marxism with the commercial magic of music through a pristine record that defined an age of recombinant pop" - Pitchfork

"One of the decade's most innovative British bands" - The Washington Post