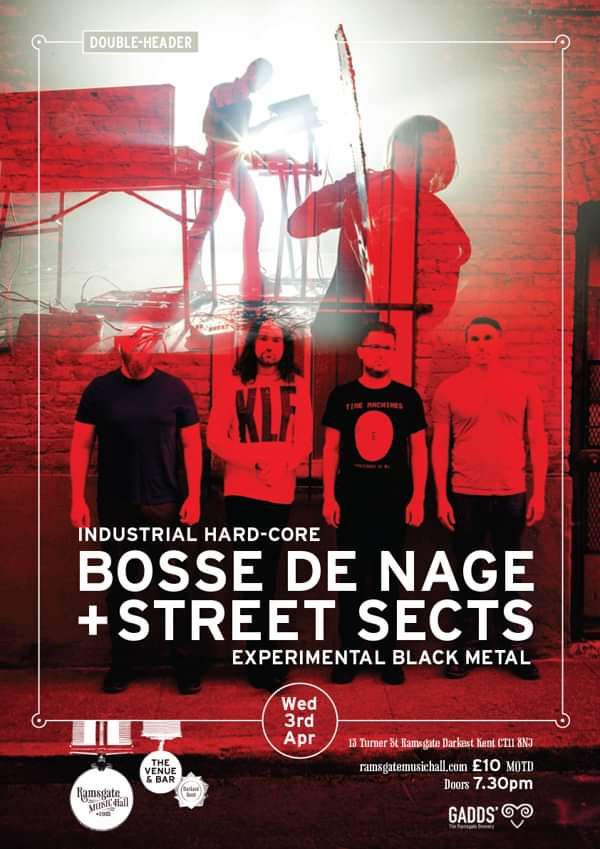 An incredible double-header for hardcore fans:

Bosse de Nage are considered as a part of the blackgaze scene. The band performs an experimental black metal style that draws from post-rock, shoegaze, post-hardcore, screamo, and indie rock, with influences from Slint, Mogwai, and Godspeed You! Black Emperor.

There are plenty of moments of outright aggression, bleak, harrowing passages of unrelenting blasts, narrated by a chaotic, urgent voice that veers between angry wails and sparse, Slint-like sotto voce intonations depending on the lyrical bent. Listening to Bosse de Nage isn't only intense... it's wholly cathartic as well.

The band's name is taken from Alfred Jarry's novel Exploits and Opinions of Dr. Faustroll, Pataphysician, in which it is the name of a monkey...

Street Sects are one of the most exciting industrial outfits in modern music. An exhilarating nod to '90s Nine Inch Nails. A feverish marriage between industrial beats and punk rock, utilising frantic, uncompromising rhythms and a variety of nightmarish samples. Their style is extremely abrasive, characterised by industrial rhythms, use of screamed vocals, samples of both noise and synthesisers, and nihilistic lyrics.

The Texan duo have already earned a fearsome reputation for their abrasive industrialised screeds and the seizure-inducing chainsaw-and-strobe-light terror of their live shows. Their latest work embraces some unexpected influences including Roxy Music/Brian Eno and Berlin-era Bowie.