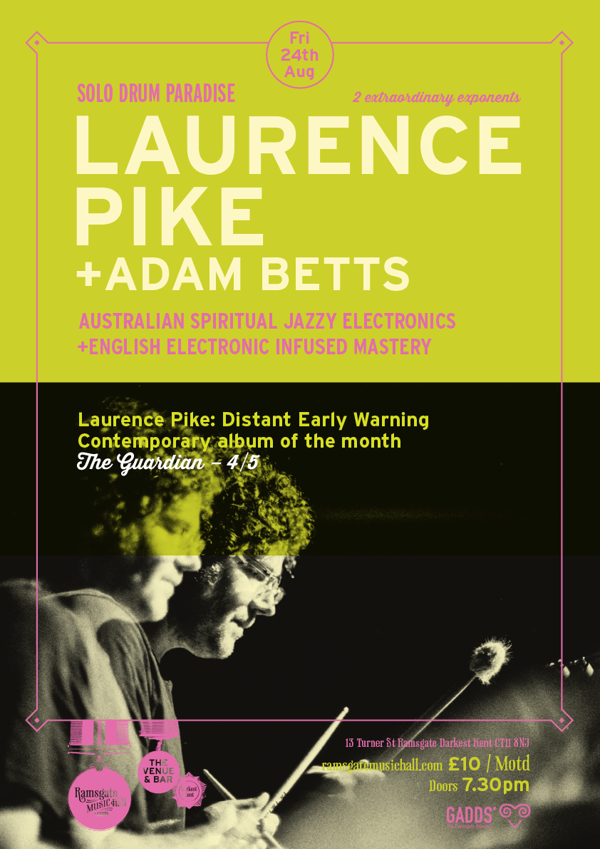 A night of solo drumming by 2 extraordinary exponents of the art. Polar opposites in one way, or beautifully entwined if viewed from another.

Laurence Pike is an Australian drummer who has appeared in a variety of settings over the past 20 years – making ambient jazz with Triosk; working with his brother Richard in the jerky math rock outfit Pivot; duetting with the one-time ECM pianist Mike Nock; and exploring tantric music with electronic artist Luke Abbott and Portico Quartet saxophonist Jack Wyllie in Szun Waves.

His debut solo album, however, sounds very little like any of those lineups. It’s basically minimalism – drones, pulses, hypnotic arpeggios that alter very gradually – but with drums rumbling over the top.

Drum kits are rarely invited into the pristine world of minimalism, a world of clean spaces and right angles. The only percussion you’re likely to hear in the music of, say, Steve Reich or Philip Glass will be the minty-fresh plonk of a vibraphone or marimba.

In contrast and equally intriguing and beguiling we have Adam Betts. His most recent visit to the venue was sat behind Mr Jarivs Cocker. He has taken the stage with numerous outfits, his own band Three Trapped Tigers, and he was also the driving force behind Square Pusher’s Shobaleader One.

He returns with his second LP, his first, Colossal Squid he performed here last year. A dynamic and progressive piece of triggered sounds and extreme drumming vigour, detailed around delicious grooves.

August the 24th… a date for your diary.